Well, I haven't been able to post as quickly as I had hoped to because we have all had the flu. Well, thankfully Miles has not been sick but all of the rest of us have. Caring for a new, newborn, 5 children who have the flu all while having the flu myself has been interesting. Rick was also sick but somehow managed to hold it all together and still be a huge help. I am also thankful to my mother and sister without whom, we would not have eaten. Seriously, they kept us fed. They also have done our laundry. EXTRA thankful for food and laundry help! :) We are all on the mend now, except for Kate, but hopefully she will be soon. Today was the first day I even attempted a group picture with all 6 and is also the first day everyone has had actual clothes on in over a week. I hope to be able to take more pictures soon and maybe some outside when the rain stops. Apparently it has been raining for over a week but I honestly didn't even notice. :)

The girls are in love with Miles but so are his big brothers. Here are some of the funny things I've heard from them this week.

Henry and Jack: Can I pet him?

Jack: (when Miles jerks) Is his arm broken?

Henry: Can I hold him again; he won't break my arms. 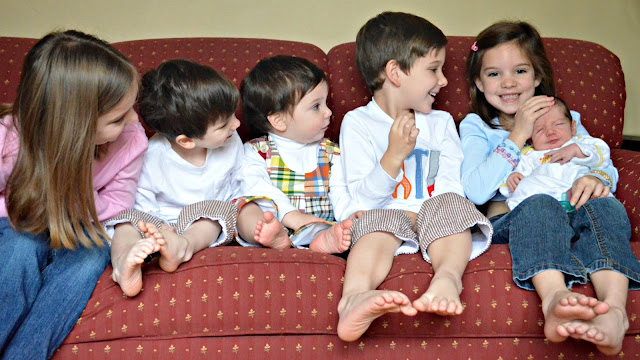