Multiple people found our blog from google searches over the past week (a noticeable increase), and I wanted to see why the sudden rise in hits from google....The searches all centered around the phrase "Bells on bobtail ring".

If you search the phrase below, our blog is the #1 entry returned. I guess this provides a little vindication to my sister-in-law. She's not the only person confused by this phrase.

what does "Bells on bobtails ring" mean

Reflecting on the death of Saddam Hussein, a multitude of questions come to mind related to Saddam before and after death. What is he thinking now? Did he have regrets and fear as he died (probably)? Is judgement an actual event before the throne of God or was he cast directly into hell? Did he realize he was wrong in worshipping allah 1 second after death or were there a few moments before that occurred. The details of life after death are a mystery to us in this world.

As creatures of God, we have eternity in our hearts, and for this reason, the extremely publicized death of an outspoken enemy of the God of scripture causes me to think about God and what death is really like. I know Christians go immediately to the presence of God upon death (no purgatory, holding area, or time of unconscious sleep), but what exactly does that look
like. The immediacy of God's actions upon His enemies is true as well. As we watched Fox News last night moments before Saddam's death I had conflicting feelings and thoughts.

I felt relief that many people would no longer worry that this man would kill them. Saddam, as an enemy of God, deserves his eternal fate, but I was reminded last night that were it not for God's grace, I would be a recipient of the same eternal wrath of God. At about 8:30 (central) last night, it struck me that Saddam was moments from knowing beyond a doubt that God
truly revealed Himself through the Bible and not through the koran or mohamed. Saddam sought his own glory throughout his life, and he has now seen the severe folly of this, but if my pastor's explanation of Mt 25:30 is correct, Saddam is probably weeping and gnashing his teeth in defiance of God even now as he receives the wrath of God.

We have a sickness in our society. We often look upon other religions (ex. Jewish, Muslim, etc.) simply as other ways of believing, but the reality is that God hates these religions. As I read through the book of Kings in the Bible, I am reminded of God's hatred for religion that calls people away from worshipping Him as the true God. The death of an outspoken
enemy of God has drawn my mind to God's power and glory. It reminds me that God is to be feared and revered. My joy increases as I realize I will not receive the same punishment that Saddam is now experiencing and will experience eternally.

If you haven't, take time to reflect on the final moments of Saddam's life as he waited to be hanged, stop a moment today and think about what waited for him upon his death. Realize you will receive the same eternal punishment this evil murderer is receiving unless Christ took your punishment upon Himself. Oh sinner, will you not repent and believe today. When will
death come our way? Saddam, as the leader of a nation, would have answered that question quite differently a few short years ago. As sinners in the hands of an angry God, our only hope is in satisfying that anger through the death of Christ.

This is a discussion from dinner tonight at the Catt house (Peggy's family):


Emma (Peggy's 15 yr. old sister): "In Jingle Bells, what does it mean when it says bells on bobtails ring?"


The funniest part about this is that Sarah was dead serious and the pause of silence afterward made it a golden moment. After a short discussion, Jordan (the Catt mom) came to the rescue and explained that a bobtail is a "bobbed" tail which is a tail that has been cut short.
Posted by Rick H. at 12/24/2006 09:01:00 PM 2 comments 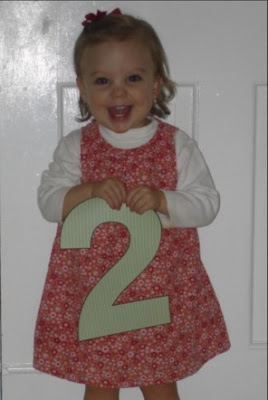 It’s your 2nd birthday today and I am amazed by you! You are beautiful and extremely smart. You talk all the time, you sing songs that I don’t even know, and you are even potty trained (of course we haven’t tried at night yet!). I am extremely proud to call you my daughter and look with anticipation to all the excitement you will bring our family in the future.
Scripture says children are a blessing from the Lord. This is true for many reasons. Not only do you bring joy to each day for us, but the Lord uses you to sanctify us, challenge us, and draw us to Himself. We are proud to see you advancing mentally and physically, but our deepest desire is to see you transformed spiritually. Each night before bed, we say, “Let’s pray” to you and you always get on your knees with eagerness. Unfortunately at this point, I think it is simply a stall tactic so you do not have to go to sleep. We will continue to pray with you and teach you catechism questions hoping the Lord will use these things to draw you to repentance, and salvation in Him.
Claire was baptized this month, and while in front of the church, Sam (your cousin) was being baptized first, and you said, “What about Claire!” Later that week, you pushed Claire over again (after we told you not too), and I had to spank you. You quickly realized that spankings hurt much more when you don’t have pants covering your legs! I hear people often speak of the “terrible twos”, but you are so obedient that I cannot see how those “terrible” days will come. You listen to everything we say and we rarely need to tell you to do something twice and we correct you with spankings even less often (your mom and I are both glad for that).
As we’ve led up to your birthday, we continue to ask what you want for your birthday, and your continued response is “Cupcakes!” You even asked God for them a couple of times. Your party is tomorrow (December 23), and your mom made you these really cool snowman cupcakes that took nearly 3 hours to make 19 of them! You are truly cherished. 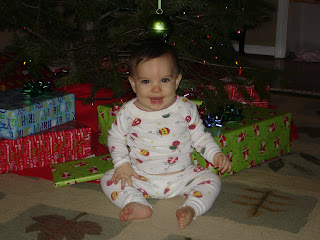 My dear Claire,
Today you are 8 months old! This has been such a busy month for you! You were baptized this month and it was so wonderful. Your father and I are so thankful for you and it was great that you and your cousin Sam could be baptized together. Also, you started crawling this month which has made things harder for me! Now I'm chasing Kate and YOU around! It has been so much fun. You also can pull up so we've had to lower your crib mattress.
You also can do a "trick." When I say "pat, pat, pat", you'll pat whoever is holding you. You also are learning to wave. I'll tell you to wave and sometimes you'll raise both of your hands which is funny. Every once in a while you'll wave your hands. You are such a happy little girl and you love to play.
This month you got your first ear infection which we are still battling. It's always hard to know when to take a baby to the doctor to get checked out. I know that something’s wrong with you when you wake up in the night or don't take a good nap.
You are also eating very little baby food now. You've almost totally made the switch to "real food." I still use it some now when it's easier. You are a great eater and love food! I don’t blame you because anything’s better than baby food! I still nurse you 5 times a day but this will probably be the last month. Your father and I are going out of town in February to celebrate our 5th anniversary which was this past August so I’ll need to be finished by then.

I can’t wait for each new month with you and I am so thankful for you.
I love you baby girl…..

We didn't send out a Christmas card this year
for fear it might end up like this one!!

Fun in the Leaves! 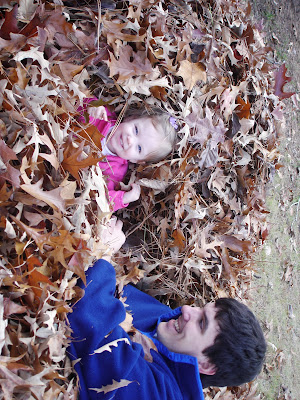 Claire Elizabeth was baptized today. It was wonderful...right in the middle of Advent. She was baptized at the same time as her cousin (Rick's sister's son) Sam.
Sam was baptized first and Kate was saying "Sam's getting baptized!" and "What about Claire??"
After the covenant vows, the father names the child and gives a blessing. Here's how it went:

May God make you wise among your peers. May He give you eyes to see His truth and a heart of repentance and faithfulness persevering in His ways throughout your life.
Your mother and I love you and our hope is that you will be a blameless and innocent child of God without blemish in the midst of a crooked and twisted generation, among whom you shine as light in the world, holding fast to the word of life. (Phil 2:15)
May you regard Christ the Lord as holy, always being prepared to give a defense to anyone who asks you for a reason for the hope that is in you. (1 Peter 3:15)
Posted by Unknown at 12/10/2006 04:08:00 PM 0 comments