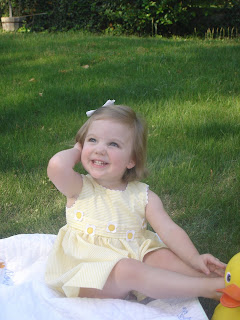 You are such a fun and sweet girl! We've been having a lot of fun these last few weeks playing outside since the weather is nice now. You still take an afternoon nap from about 1 - 3 and sleep at night from 7 - 7. You are obsessed with the color orange...that is not an exageration. You want orange shoes, orange clothes, orange cups, plates, etc. Everywhere we go you point out everything that is orange! Also, you talk non stop. I don't think a second goes by when you aren't talking. Your father asked me a few days ago if you ever stop talking during the day and of course I said no. I love talking with you. Poor Claire, I don't think she stands a chance in getting a word in. You are a very smart little girl...sometimes too smart! A few nights ago I was giving you and Claire a bath and she kept standing up. I told her to sit down and she didn't so I gave her a little spanking on the bottom and she sat down. A little while later she stood up again and I told her to sit again and she didn't so I spanked her again and this time she didn't sit down. You looked at her and said, "Sit down Claire," and then you popped her on her bottom and then she sat down. I told you not to spank her and to let daddy and I take care of Claire. You looked at me curiously and said, "but she sat down."
You love to sing. Whenever you hear a new song, you'll listen to about 30 seconds of it and then ask me to hear that part again. So we'll listen to it again and again until you memorize it and then you'll move on to another part of the song. It's actually pretty neat that you do that.
I'm so happy to have you as my daughter. You are a blessing and a joy to me and to our family.
I love you and I love you,
Mommy
Posted by Unknown at 5/22/2007 07:09:00 PM 0 comments 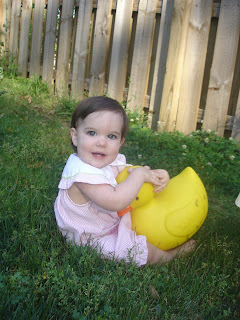 Today you are 13 months old! You are so much fun! You have 6 teeth now and your hair is getting lighter. It's almost the same color as mine which is a change since it started off black as night. Your eyes are very pretty; the outer ring is blue and the inside is a dark green.
You started walking the week after your first birthday and I don't think you've crawled since! I think one of the sweetest things to see as a mother is your child learning to walk. It's adorable and you can just look at you and see all the effort it takes to keep your balance and to put one foot in front of the other.
You are such a funny little girl too. You walk with your arms up for balance and the left hand is ALWAYS in a tight fist and your right hand is raised too but you ALWAYS wave it when you walk. It's really funny to see. The funnest thing you do though is to take something of Kate's (her cup, blanket, toy) and run off with it. You will start dying laughing as you run off with her stuff. Kate starts laughing too and will chase you down to get her thing back. She'll always bring something with her to trade with you though. If you take her cup...she'll grab yours and run saying "NO SISSY! That's MY cup! Here's yours!" Then she'll take her cup back and give you yours. This happens multiple times a day and it really funny. As I'm writing this letter, Daddy just came in saying you had run off with Kate's shoes and thrown them in the toilet! You are funny funny.
Kate is very protective of you. One day this month Daddy had to give you a little spanking and you of course started to cry(you are slightly dramatic.) Kate said, "Claire does not like that...she just needs a hug." So she proceded to give you a big hug.
You are truely a joy and blessing to all of us and we are all so thankful for you. You make us smile and laugh and I can't believe we've had you with us for 13 months now.
I love you now and always,
Mommy
Posted by Unknown at 5/19/2007 06:38:00 PM 0 comments

He's still alive!! Rick has had an exceptionally busy last few months. It all started with a very demanding seminary class. It was just a general New Testament class which we both assumed would be an easy class for him to take this semester. Well, it wasn't. He had to memorize a key verse from every book in the NT (Romans to Revelation) and the outlines of each book (the outlines according to the ESV Reformation Study Bible...if you have it...you will see how difficult that was.) Then on top of that was all the reading normally involved as well as a 22 page exegesis of Romans 3:21-26.
This is in addition to his normal job as a software engineer which in the past months has been more demanding because of a role change, etc.
He also has been remodeling our bathroom.
He also has a 2 year old and a 1 year old.
He also has a wife...and a sick pregnant one at that...(i'm thankfully better now)
So great job Rick...I love you and I'm proud of you!!
Posted by Unknown at 5/17/2007 12:22:00 PM 0 comments

Tonight, we used the method where Kate repeats the words after me. I'd like to share the prayer with you now.

Rick: Thank you for life

Kate: Thank you for life

Rick: Please help my bottom to feel better (she has a small rash)

Rick: God, you are perfect

Kate: you are perfect


Thank goodness for Romans 8:26, which says:

"In the same way, the Spirit helps us in our weakness. We do not know what we ought to pray for, but the Spirit himself intercedes for us with groans that words cannot express."
Posted by Rick H. at 5/08/2007 07:13:00 PM 1 comments

Another day with kate

Peggy is pregnant and not feeling well. The other day she was lying on the floor, and Kate came up to her and the following conversation ensued...

Kate: Mommy, can I have some chocolate milk.

Peggy: Just a minute baby, my stomach is really hurting.

Kate: I know what will make you feel better.

Kate: How 'bout let's go get me some chocolate milk.

After laughing and getting Kate some chocolate milk, Peggy realized that Kate was right, she had made Peggy feel better.

Peggy was gagging and coughing (which she does often during the first trimester of pregnancy), and Kate was coughing as well because she has a cold. After this went on for a while, Kate stopped and said to Peggy:

Kate: Mommy, I think I have a baby in my tummy now too.

we finally got our wireless network working again so I figured it was tine for a new blog post! We haven't posted in a while for 2 reasons. l. We an too lazy to walk downstairs to use the Computer & Q Reggy is pregnant and since striders most of our posting, we had no one to post because she has not felt well.

Now on to The post. First I'll explain the title & then I'll tell a story. My worK bought me a new computers they got Me a tablet PC. I'm writing this post W/a pen on the screen & the recognition of My chicken scratCh handwriting is amazing. this technology blows my mind. I find that I think More about what I'm writing when I use "ink" instead of simply typing.

I cannot explain how amazed I am that it recognizes cursive writing as well as regular print. I often switch between the two in a Sentence & this thing has no issues w/ that .